Today's obituary is for my double great grandmother.  Why double?  She was married to both my paternal great-grandfathers.  After divorcing her first husband, she married her second, whose son by a previous marriage, married her daughter from her first.   Such a tangled web builds our family trees.

This obituary is from a 25 February 1954 paper, probably Fremont Times Indicator: 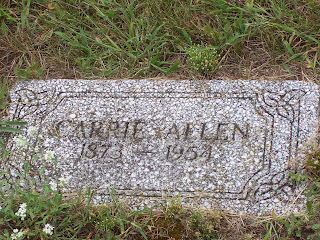 Funeral service will be held Friday afternoon at 1:15 from the Dayton Center Wesleyan Methodist Church for Mrs Carrie B. Allen, 80, who passed away Tuesday morning at Gerber Memorial hospital following a lingering illness.  Rev Leonard Brown will be in charge of service and the body will be taken to the Alton cemetery located north of Lowell for burial.
Mrs Allen was born on March 4 1873 in Michigan.  She has been making her home with a son, Clayton Cross at 127 E Elm.
She is survived by two daughters, Mrs Edna Allen of Fremont, and Mrs Clyde E Wilson of Grand Rapids, three sons Herbert J Cross of New Buffalo, Arthur Cross of Bitely and Clayton of Fremont; two sisters Mrs Agnes Sullivan of California and Mrs Burt Riterstorf of Cedar Springs, two brothers Fred Ford of Lowell and Kirk Ford of Bitely; 20 grandchildren, 48 great grandchildren, 6 great great grandchildren.
The body will repose at the Boven Funeral Home until one hour before services.

Ggrandma Carrie is still remembered among my older cousins.  I remember her sitting in her kitchen chair on casters that served as her wheelchair.  My cousins state she was sometimes caught out of the chair, although she officially could not walk.
Her second husband was Omar Allen, mentioned in the previous posting.  Since I didn't have his obituary, I wanted to share hers.  Notice how her stone is similar to his shown previously, but flush to the ground.   The funeral home was a local Fremont establishment that later became Kroeze Funeral Home that is still in business today.

Yup, another one from my family.  GGrandpa Omar was the father of Delva, featured last week.  His stone is in Alton cemetery, in Vergennes township, Kent county, Michigan.  It is a beautiful old rolling cemetery.  The original church is in the corner of the cemetery and many family members names are listed in their rolls. 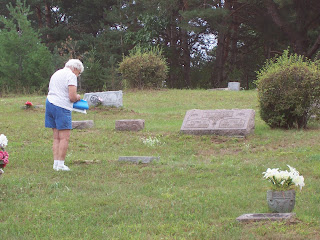 Luckily, on my trips there I have been accompanied by my aunt, who knew right where to find GGrandpa Omar and his second wife, Carrie Ford Cross Allen.
The stone is a simple granite, rather weathered with just the years 1857-1945. 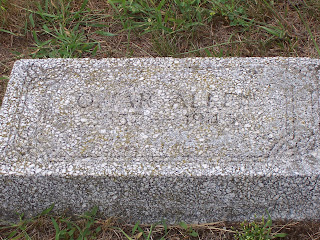 Interestingly he passed away just a week after his son died.

I shared the stone and some pictures of Grandpa Delva on Tuesday.  This is his obituary that appeared in the local paper.  Dying at the end of World War II, two of his sons were still in the service.  Uncle Howard chose not to return for the service, wanting to remember his father as he had left him.  My father, although living in Grand Rapids, had been wounded in 1943 and was discharged and home for his fathers last days.

From the 13 September 1945 Fremont Times Indicator:

I also find amusing that Uncle Clayton is referred to as a step-brother.  He was also a brother-in-law.  What was the reason for not calling him brother-in-law?  Was step-brother considered closer? In one of those examples of the family tree being more of a tangled bush, Grandpa's widowed father Omar, had married Grandma's divorced (Horrors!) mother Carrie.  Thus Grandma's mother was both mother-in-law and step-mother to Grandpa.
Genealogy can be so confusing.
Posted by Linda at 10:43 AM No comments:

Tombstone Tuesday--Don't Believe Everything You See

My paternal grandpa died before I was born.  His stone is a joint stone with grandma's in Newaygo County's Clark Cemetery.
It is a nice upright wedge shaped stone. It is located near the drive, but not too near, under a large maple tree.  No danger of their stone getting buried in grass, leaves and soil anytime soon.  It is more susceptible to moss and lichen. 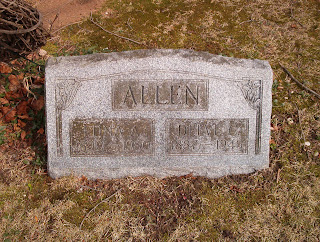 But there is a problem with their stone.  Specifically with Grandpa's name.  It's spelled wrong.
I know it is spelled wrong because I was given the correct spelling many times.  My grandma, Dad, several aunts and others used it several times in writing.  It should be Delva.  I also had a cousin named for grandpa.
Although hard to read in the picture above, the stone clearly says Delve. 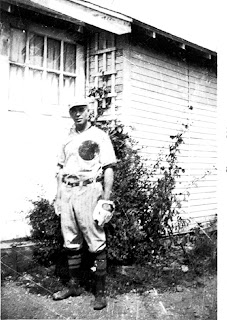 Grandpa Delva did have a fairly unique name.  I haven't met anyone with that name, other than my cousin.  But his line comes from a long line of what are today rather unusual names: Laban, Elisha, Ebenezer, and Omar among others. 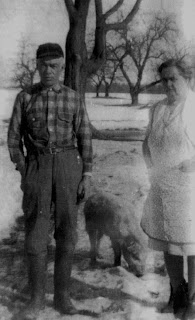 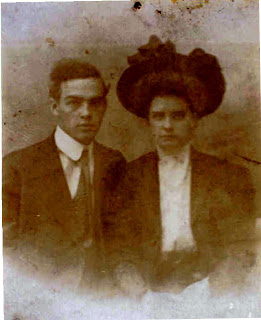 But it all goes to show, that you cann't believe everthing you see when doing genealogy.
Pictures top to bottom--

Last time I showed the grave of my grand aunt Myrtle. In the picture below she is the oldest daughter, on the left. My grandpa Leon is the oldest boy, on the right. Of course I never knew her, but I am glad I caught this glimpse of her short life. 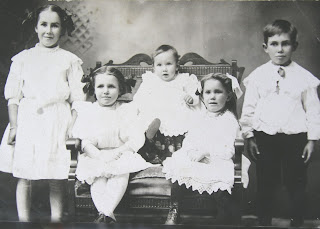 The following is from the 24 March 1921 Reed City paper, the Osceola County Herald, page 6
Obituary -MRS RILEY SCHERMERHORN
Myrtle Fay Gilbert, daughter of Mr. and Mrs. Roy Gilbert, was born in this vicinity August 17, 1898, and was married to Mr. Riley Schermerhorn of Hawkins May 2d, 1920.  The young couple established their home in flint and deceased lived there until the time of her death.
Deceased united with the Barton U.B. church eleven years ago and had been a faithful member. Besides the husband and parents, she leaves an infant babe, three sisters and two brothers, besides a host of friends.  Funeral services were held from the Baptist church Sunday afternoon, Rev Pegg officiating.
"Live true, dear soul, thru your sorrow,
Keep Christ as your Savior nearby.
Look upward, look onward each moment,
Reach Heaven your home yonder, on high
(line partially illegible "Once began"?) each word, each action
Will mold your future abode,
God's love over all overshadows
Though 'tis as yet not understood."


This was also on page 6.
CARD OF THANKS
We wish to express our heart-felt thanks to the friends and neighbors who so kindly assisted us during the illness and death of our darling wife and daughter.  Especially do we thank those who sent flowers and furnished cars.
Riley Schermerhorn and son, Mr. and Mrs. Roy Gilbert and Family
Posted by Linda at 3:27 PM No comments:

The line of stones that I have talked about before, with my great- and great-great-grandparents.  Those darn flat stones that are sunk level with the surrounding ground.  The fifth in the row of five stones belong to older sister of my grandpa Leon.
Myrtle Fay Gilbert married Riley Schermerhorn in 1920 and died in 1920 giving birth to her son.  Her son, although he lived near Lansing, would still visit her grave in Chase, Michigan.  I often found flowers when I would visit the grave in the summertime.  I think her stone is still clear because both her son and I would clear it off on our visits. 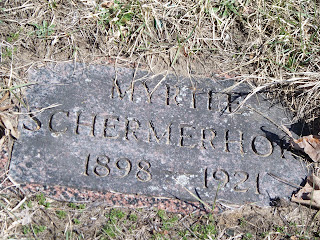 In this family photo Grand Aunt Myrtle is the tallest child, pictured with her siblings and my Great-Grandpa Roy and GGrandma Ada.  My grandpa Leon is the tallest boy in the middle. Uncle Harry is still in skirts in Grandma's arms. Also picture here are Aunt Goldie in back left, and Aunt Nellie in front between GGrandpa Roy and Grandpa Leon.  Aunt Dorothy was still a "gleam in her father's eye." 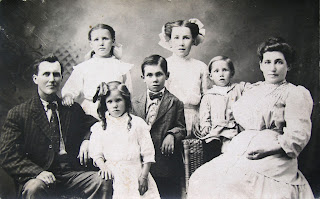 I must close with this bit of family legend.  I heard from one of my family members, (unfortunately I didn't write down who--bad me!) that she died in childbirth only because the only doctor available was a veterinarian who "butchered"  After this, the townspeople ran him out of town.
Posted by Linda at 3:01 PM No comments:

A marble slab.  Surely that is the iconic image of a tombstone.  But there is nothing simple about those marble slabs.
This row of slabs are found in Everett-Big Prairie cemetery, also know as Community Cemetery. 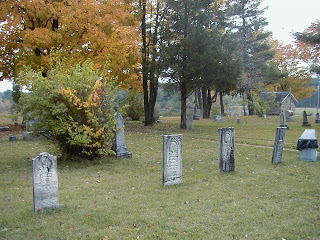 The four stones, all in a row are probably from the same era.  The left most above is a slightly different shape on top.  The next three all seem to be similar in shape and design.
The picture of this stone below was filed just before the above picture.  It looks like it could possibly be one of those three on the right.  The first of those has a streak across the bottom, like this stone. 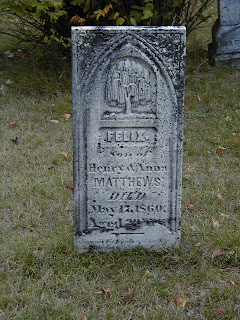 The stone for Felix Matthews is is a simple slab, yet it has the image of the weeping willow with some additional carving in the top corners.  The inscription reads: Felix, son of Henry and Anna Matthews died May 17, 1860, aged 24 years.
The bottom of the stone has an additional verse but it is faint.  It looks to me that at one time, there must have been dirt or debris piled higher around the stone.  The dark streak across the bottom is a bit of a deposit on the stone.  And, since below that line, the stone is less decayed, I think something was protecting that area. Whether it was buried or not, it definitely was not exposed to the elements.
Either way, there is something special about the old marble slab.
Posted by Linda at 4:50 PM 1 comment:

Sandy and Linda, the Cemetery Divas 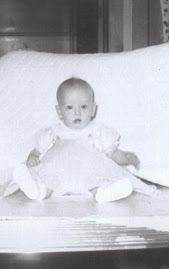 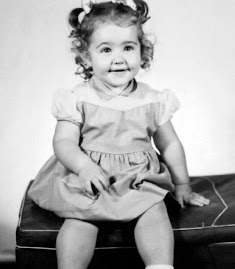